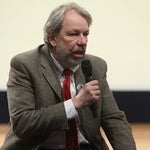 Richard Kessler is the senior lawyer and founding attorney of the Law Office of Richard Kessler. He has been a practicing attorney in Michigan since 1982 after graduating from the University of Michigan Law School (Go Blue!) Richard has specialized in the area of immigration law as well as workers compensation, labor rights, accidents, and limited criminal related immigration cases. He has specialized in serving the immigrant community and most of his clients are immigrants or children of immigrants.

Richard has always been fascinated by other countries and immigration. He was born and grew up in Grand Rapids Michigan a growing diverse community His grandparents are Jewish immigrants from Central and Eastern Europe. He has always been an activist working for social justice and even as a high school student in the 1970's worked with Cesar Chavez and the United Farm Workers both in Michigan and in California to bring justice for farmworkers And later with the Farm labor organizing committee and northwestern Ohio and Michigan.

He attended Grand Rapids City High School, in its founding years, which was an alternative magnet school that involved serving the community. Graduating in the bicentennial year of 1976. Richard obtained his undergrad degree in political science at Ohio University at the Honors Tutorial College in three years where he was a member of the PHI BETA KAPPA. Throughout this time Richard was involved in social justice movements particularly with Spanish-speaking immigrants. He speaks fluent Spanish. and is completely bilingual in Spanish.

Richard has traveled too many times to count to Mexico, and Central America, as well as Israel, India, South Africa, and Europe. Richard is very proud of his family, his wife Lucy Godoy who is an immigrant from Honduras, and their three children, Mabel, Celeste, and Ricardo.

Richard has been very involved as an attorney representing persons particularly in immigration courts where he has represented probably more clients than any lawyer in the Western Michigan area. He is also an avid advocate for immigrants socially and politically. He is a founding member of the West Michigan Coalition for Immigration Reform, The Michigan Immigration Rights Association, and the Kent County Immigrant Bond For Our Neighbors Defense Bond Fund as well as the American Civil Liberties Union lawyers committee, and the National Lawyers Guild Immigration Project. He travels every year to Washington to lobby  Congress for comprehensive and positive immigration reform with the American Immigration Lawyers Association.

After working at Michigan Migrant Legal Aid for five years. Richard formed his own practice, seeing the need to serve immigrants who would be applying under the Immigration Reform Act of 1987, the so-called “Reagan legalization/amnesty” Richard helped legalize thousands of workers during the next years through that act, more than any other attorney in out-state Michigan.

Richard won the first immigration asylum cases in Michigan for Central American political refugees, including from, Guatemala, Honduras, as well as some of the first cases representing Gay and Lesbian victims of persecution in Mexico and Colombia.

Richard believes that the law practice is more than getting paid to go  to court for someone, but also getting to know and help people and work with the immigrants and their families who he sees as not just cases but actual people and friends. The philosophy of his office where all of the workers are bilingual, including Attorney  Damien Sanchez and legal assistants Rosemary Guzman and Rina Godoy who is an attorney in Honduras, is to serve the community and the clients as best as possible, not viewing them just as a source of money.  Mr. Kessler has also represented immigrants from many countries throughout the world including India, China, Africa, and the Caribean, as well as Spanish speaking clients from over ten countries. He has represented people from more than 45 different countries.

Thank you for contacting us. We will get back to you shortly.

Please complete all required fields below.

We’ll gladly discuss your case with you at your convenience. Contact us today to schedule an appointment.